On May 18, the VII Spanish Cup of Olympic Wrestling was held in Alcalá de Guadaira (Seville) for boys and girls of mixed wrestling promotion, pre and youngest, fry without forgetting the school children.

It was a total success of organization and participation. Sports schools for Olympic wrestling arrived from all over Spain. Boys and girls from different European countries but resident in Spain also participated.

Any adjective is too small for the event that we were able to witness with 6 tapestries in competition with fights in unison from 11 in the morning to 3 in the afternoon without interruption.

We cannot forget inclusive wrestling in which boys and girls were also able to demonstrate their passion and purity in the first adapted wrestling cup in Spain. They were fights in which we could not stop being moved by seeing how they enjoyed the experience and we hope that next year they will also come from all over the peninsula.

spectacular overview of the work done by the organization and the Scorizer team. 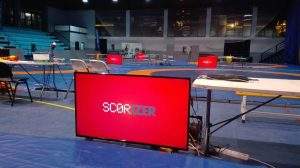 Scorizer the best choice for your most important events. 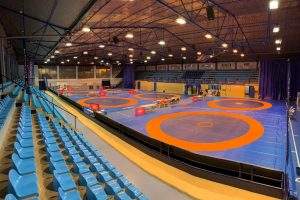 Another snapshot of the impressive staging for the event. 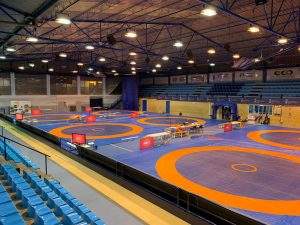 panoramic view of the pavilion prepared for the competition.

The Spanish Veterans Championship in its four categories of Olympic Wrestling also gave us some admirable matches, seeing as that "those who had held back."

Given the success we have obtained, we hope that in the years to come we will improve on the mistakes that we may have made.

SCORizer thanks the attendees and the participants to the unforgettable event, inviting them to repeat the next one.

U15 / U17 Gijón 2020 Olympic Wrestling Championships in Spain

The championships of Spain sub 15 and sub 17 that were held last Saturday, March 7, gave us a magnificent day of sport. The girls showed us in Olympic wrestling that they work Read more…

This Saturday, March 7, the Spanish championship for women's and men's Olympic battles under 15 and under 17 will take place in Gijón. We will have the opportunity to see how the Read more…

Sunday, turn for the Olympic Fights in Andalusia.

On December 1 again in Maracena (Granada). We had another day full of battles with teams from all over Andalusia. The official Andalusian championship of Olympic Fights and valid Read more…